Edibles for After a Chilly Game

This big cold front came through AND it's rainy.  With an evening kickoff, this could be one of our coldest games we've ever had in September!  (Didn't I mention after the last home game that it was the hottest ever?!)  Soup will be just right. Since I want something cooking while we are at this chilly game, something in the slow cooker will be even better.  I asked what kind of soup sounded good to the boys in my house and they said Baked Potato Soup.  Decision made!  Here's a recipe for Baked Potato Soup for the slow cooker. 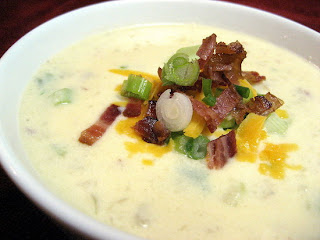 Put chicken broth and potatoes in slow cooker on low.  Melt bacon grease or butter in small skillet.  Add onion, garlic and basil to the fat in the skillet.  Cook over medium-hugh heat until onion is softened and lightly browned, about 10 minutes.  Stir in flour and cook for 1 minute.  Whisk in 1 cup broth from the slow cooker, scraping up brown bits from the pan; add mixture to slow cooker.  Cover and cook on low for 4-6 hours.

{Prepare garnishes and cheese, milk, sour cream and food processor by measuring and having it all ready to go.  Now go to your game and have fun!  When you get home from the game...}

Transfer 2 cups cooked potatoes to food processor or blender and pulse a few times to mash (do not blend to much or the potato starch will get gooey).  Stir cheddar into soup until evenly melted.  Stir mashed potatoes back to the slow cooker.  Stir in milk and sour cream.  Let soup sit until heated through, about 5 minutes.

So this is what our Post-Game menu looks like for a late night meal.  Many of these recipes will be shared in the future:

Barbecued Pork Ribs  {2 racks}
Baked Potato Soup  {I'm doubling this}
Toasts with a cheese, mayonnaise, butter mixture baked on
Hot Artichoke and Olive Dip with tortilla chips
{hot dips cook during the game in my football shaped small slow cooker. you can laugh}
Onion Jam on Cream Cheese with crackers
Cookies
Chocolate Pecan Pie
S'mores {if the rain stops and we build a fire in our fire pit outside}

Happy Gameday, everyone!  I hope the weather is good today in your college town...and that you get to celebrate a victory.  Go Team!