October 27, 2011
I will never forget a game we played on Halloween in Boulder, Colorado.  I thought it was so clever the Colorado dance team used their costume collection to create a costume for each girl..a cowgirl, a flamenco dancer, a police officer, a detective...

This weekend's games run into Halloween and it's so fun to add a little Halloween flair to your Gameday celebration. But don't just limit these ideas to football...these would be great just to simply celebrate Halloween.

Here are some ideas for some items to serve that are spookier than your normal tailgate fare.
(And all of you schools with orange and black for your school colors better be going all out!) 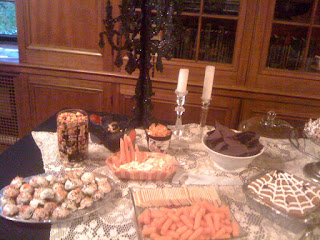 The above fun party table is not  from a tailgate, but thought you would enjoy using some of these ideas a few friends and I made for a get together on campus.

1) Oreo truffles with Halloween or team colors
2) Blue corn tortilla chips and Mexican Dip (with a sour cream spider web)
3) Look closely at that dip (Cheddar Bacon Dip) in the middle...that is a hand made of carrots coming out of it.
4) Snack mix served out of a Halloween themed vase
5) And there is our tailgating candelabra anchoring the table

Here are the instructions for the creepy carrot "fingers" we made,
from Family Fun magazine: 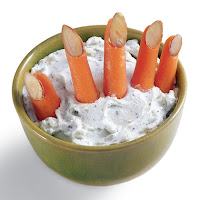 Fill a serving bowl with your favorite dip.  Wash and peel 4 long carrots for fingers and 1 medium carrot for a thumb.  With a paring knife, cut a flat, shallow notch in the tip of each carrot.  Then use a dab of dip or softened cream cheese to glue a sliced-almond fingernail atop each notch.  Stick the fingers in the dip, as shown, and serve with plenty of peeled baby carrots for dipping.  (I used the gangliest, gnarliest looking carrots I could find)


This frightfully fun table easily could easily be replicated in your parking lot on
Gameday or for a Trunk or Treat tailgate.
Don't forget the dry ice to make some eery "smoke" for your drinks! 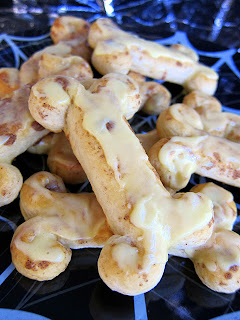 I love these for a cute, simple and tasty addition to your Halloween tailgate menu.  They're called Cinnamon Bones from www.plainchicken.com.

Preheat oven to 375. Separate the cinnamon rolls and unroll. Cut each unrolled cinnamon roll in half to make 16 pieces of dough. Cut the ends of each cinnamon roll strip about an inch down the middle roll. Roll or shape the resulting four flaps of dough into knobs that look like the ends of a bone. Bake 12-15 minutes. Frost with icing that was included with the rolls.

Plain Chicken has several other great Halloween themed recipes.  You should go over there and check them out.

A little idea for your tailgate standard Solo cups that my friend Julie made for a Halloween get together...mummy cups!  The instructions are over at a darling party idea blog, One Charming Party. 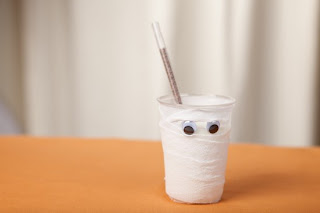 You could even make some custom labels for your beer or wine.  Serve up some "Murky Merlot" or "Queasy Reisling"...here are some for your own wine bottles from Martha Stewart. 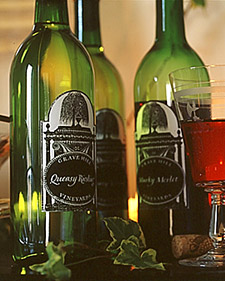 And don't forget a frozen water filled rubber glove buried in your cooler.  It would be a nice surprise for an unsuspecting guest digging around for a beverage.  BOO!