Would you like some ranch dressing with your cupcake?

January 24, 2012
Looking for something fun and creative for your Super Bowl?  You might flinch when you hear the terms, Beer Cheese Cupcakes with Bacon Cheddar Cream Cheese Frosting and Buffalo Chicken Cupcakes, but these are no joke.  Think of these cupcakes not as something sweet, but as gooey loveliness to add to your gameday appetizer table.

Cupcake Project is a blog all about cakes in a cup and is the source for these savory cupcake recipes.

Stef at the Cupcake Project combines brown sugar, cheddar, beer and sour cream for the base.  The frosting is sweet with the yum of cheddar and bacon combined.

But Stef takes this idea a little further and has created another cupcake appropriate for Super Bowl 2012...Buffalo Chicken Cupcakes.  I have to admit, this recipe takes some convincing for me.  Reading this from the Cupcake Project convinced me:

"After hearing that I was going to bake buffalo chicken Super Bowl cupcakes (with hot sauce and blue cheese in the cake and a blue cheese buttercream frosting), one of my friends asked if I would be baking the cupcakes as as a joke.  "Are they just supposed to be funny, or will you actually enjoy eating buffalo chicken cupcakes?"  Having not yet baked the Super Bowl cupcakes, I told them that I was baking them mostly for the fun of it.  I didn't expect them to be particularly good.

When my house started to smell like buffalo wings (there was no chicken involved at this point), I knew I had the flavor right.  When I took a lick of my cupcake batter-laden finger, I began to suspect that I was going to like the buffalo chicken cupcakes.  When I tasted the cupcakes hot out of the oven, I realized that I had created a new crowd-pleasing Super Bowl tradition." 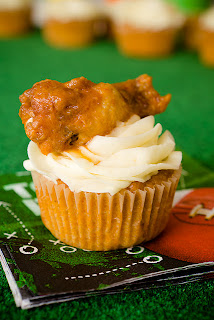 Read more and pick up the recipe at: http://www.cupcakeproject.com/2012/01/buffalo-chicken-super-bowl-cupcakes.html#ixzz1kLvZ0xvG

These cupcakes have what it takes to be the little edge that makes everyone remember your Super Bowl get together.  Give them a try and let Gameday Style know how they turn out!