Super fans are on their computers checking Twitter, ESPN and message boards...
High school football players are celebrating with ceremonies at their schools...
The coaches are all hovered around fax machines, waiting for the letters to come in and anxiously waiting for their first day off since late July.
And there are lots of parties in the works.
It's National Signing Day today and I'm thinking about lots of football families everywhere. 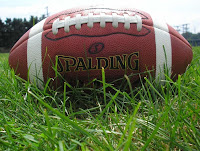 For some more casual fans, Signing Day makes one wonder what in the world is even being signed.  To clear things up, I have given you an article from Rivals.com
explaining the entire thing...

Thousands of high school athletes will sign their National Letter of Intent this week, beginning the next phase of their lives as a collegiate student-athlete. On the flip side, coaches all over the country will wait pensively in front of the fax machine for those coveted signatures.

But what does all this mean? Why all the hubbub for a sheet of paper and a signature?

Simply put, a National Letter of Intent seals the recruiting process. With his signature, a student-athlete accepts a four-year institution's athletic scholarship offer. The signature ends a student-athlete's recruitment and binds him to a single college or university.

A signed letter is binding to the university or college, not a coach or team. It is binding for one academic year. It does not guarantee a spot on the team or playing time.

Student-athletes sign a National Letter of Intent only for the first year. NCAA rules require institutions to notify athletes whether their athletics aid has been renewed.

Schools recruiting a student-athlete will send a National Letter of Intent, indicating an official scholarship offer.

A parent or legal guardian of a student-athlete under the age of 21 is required to sign the letter of intent along with the athlete. College coaches are not allowed to be present for the signing of a letter of intent.

Most Division I-A programs release signing lists on National Signing Day of the members of their incoming freshman class, which is generally around 25 members.

The National Letter of Intent program is intended to prevent last-minute changes on the part of both the student-athlete and the institution. The student-athlete is ensured financial aid for his first year of college while the athletic team is ensured his presence on the team for the coming season, pending academic qualification for the scholarship.

Fifty-four conferences and nine independent universities are members of the program, which is administered by the Collegiate Commissioners Association, not the NCAA.