Your (other) Tournament Bracket

March 19, 2012
Garden and Gun magazine is so clever.  They have their own tournament bracket in March...for food.  If you love Southern fare, you should check this out.  It's fun! 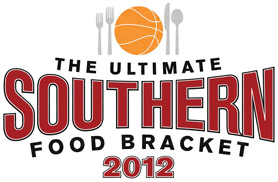 "Last year we came up with the slightly crazy idea to do our own version of the March Madness bracket, pitting the stalwarts of Southern food against one another in a battle for culinary supremacy. The response was, well, pretty overwhelming. In an upset, shrimp and grits took the title over pulled pork, prompting one disheartened Facebook fan to tell us, “My world makes no sense anymore.” But hey, what’s a rivalry without a little heat?

The time has come for a rematch as we kick off the second annual Ultimate Southern Food Bracket. The heavyweights are back, along with some scrappy underdogs. And to keep it interesting, this year we’ve grouped the teams into four Southern divisions: Barbecue, Lowcountry, Classics, and Cajun/Creole. Over the next few weeks, you can vote online to determine who makes it into the Sweet (and savory) Sixteen, the Elite Ate, the Foodie Four, all the way to the Southern food champion.

After you vote, be sure to enter our Southern Food Sweepstakes for a chance to win an exclusive G&G prize pack (a Le Creuset cast-iron French oven, a Hable Construction shopping tote, a G&G canvas apron, and five autographed Southern cookbooks).

Will mac and cheese trounce collards? Can boiled peanuts make a Cinderella run? Can anyone take down fried chicken? You decide. Click here to cast your vote."

Snack on the Stadium

December 28, 2011
With bowl week upon us, I felt it "important" to re-publish October's Snack Stadiums post.  Snack Stadiums strike me as the uber-appropriate addition to a holiday gameday party.  Whip one up in the next couple weeks or start planning for a Super Bowl Snack Stadium.  Enjoy!


You are going to love this gallery of football stadiums made of  enough food for the entire party.  Holy Taco gives you the instructions to  create this beauty, complete with the dip field.  Click here for the instructions.

Now this is the time I should let you know that there is an entire website  dedicated to these pieces of edible art/architecture/engineering feat.   www.snackadium.com.  I am not making this up!   Here's what you'll see over there:

November 25, 2012
The regular season is over and it's time to start thinking about the season (aka bowl season).  Don't forget to check out past Gameday Style posts for more great gift ideas.
First up, is The Old Try.  I purchased this print a few months ago for my home that's trying hard to raise two gentlemen...

The Old Try has some Gameday Style in a subtle, fun and classy way.  Subtle, because you may not know what some of these designs are referring to, unless you're a devoted fan of one of these Southern schools.

Take a look at