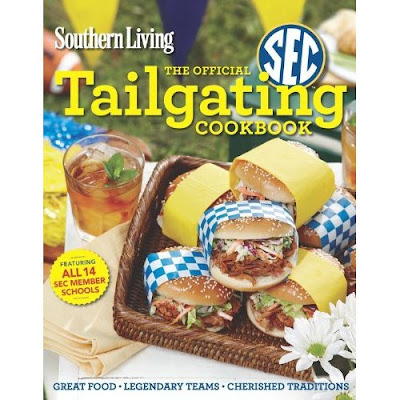 Southern Living has graced us with their entertaining prowess again...tomorrow the publisher will release The Official SEC Tailgating Cookbook will be released.  This is from the publisher's newswire release:

""Tailgating has become the ultimate family reunion across the South, and the great thing about it is that everyone's invited," says Rebecca Gordon, SEC Football Fanatic, Tailgate Strategist and Southern Living Test Kitchen Director. "Whether you're a season ticketholder or tailgating in your own backyard, the Southern Living Official SEC Tailgating Cookbook is sure to make your football celebration a winning success."

From the Ole Miss "Ole" Fashioned to Rocky Top Popcorn, Southern Living has developed menus and tailgating ideas for every fan base. The 256-page cookbook features over 150 game day recipes and special sections highlighting each of the 14 SEC schools' game day traditions, character and hometown flavor.

SEC Associate Commissioner Mark Whitworth said: "With the highest number of national titles in the Bowl Championship Series (BCS) and the addition of two new schools to our conference, this is an exciting time for the SEC.  The Official SEC Tailgating Cookbook does a wonderful job of celebrating our 14 teams and demonstrating what makes the SEC game day experience unlike any other."

Books will be available online through SECstore.com and major book retailers including Amazon.com, Barnes & Nobile and Books-A-Million.  Grocery stores throughout the southeast will also carry the cookbook, including Kroger, Publix,Winn-Dixie, Sam's Club, Costco, Harris Teeter and Wal-Mart.

Rebecca Gordon, SL's Test Kitchen Director and subject of this Gameday Style post, has worked long and hard on this project.  So cute how the release describes her as "SEC Football Fanatic" and "Tailgate Strategist" along with her real job title.  And she is so right about the family reunion part.  Can't wait to pick mine up!